“The London Flex office market has seen a raft of new centres open over the last 6 months, with more to come, but it’s not been enough to satisfy business demand. We have observed a net decrease of 2.4% in available Flex space, quarter on quarter, which has raised prices 3.4% and marks a long awaited reversal to the pandemic’s downward trend,” said Jim Groves CEO and Co-Founder of Rubberdesk.

“Pockets of London like Paddington and Farringdon are booming as the new Elizabeth line means shorter journey times between popular sought after destinations. We expect demand to strengthen and the flight to quality to remain a key driver for businesses resulting in upwards pressure on prices in select areas in Central London,” said Laura O’Sullivan, Rubberdesk’s Flexible Space Specialist for the UK and Ireland.

After two quiet years, the flexible office market in London has reemerged as a viable option for office space for businesses both small and large alike. While some businesses are requiring all employees back to the office, many other companies are transitioning towards a hybrid model of work from anywhere that includes the office as a central gathering place. This new demand is leading to a reduction in supply and increased costs for flexible offices across London.

As the largest market in the UK and one of the largest in the world, the cost to rent a permanent desk increased 3.4% QoQ to £690 per month with offices in East London jumping up 3.5%.

What's New: With lockdowns behind us, serviced office operators such as The Boutique Workspace, Situu, Storey, Workpad, The Office Group, Venture X as well as others have opened over 20 new spaces across London with another 5 to come over the coming months.

Prices Rise 1.1 % due to Reduced Inventory in Central London

At the heart of London there's just over 3 million sq. ft. of available flexible office space to rent across 2,500 vacant offices. We've seen increased demand for space in Central London leading to a 1.1% increase in the median price to rent a desk in a private office to £750 per month. The 5.6% drop in vacant space is despite new new additions from a number of operators.

Though there is still value to be found, we have observed a flight to quality amongst tenants as they endeavour to attract employees back into the office and compete for talent in a tight labour market.

Southwark represents the best value at £704 per desk while demand for space in Westminster has pushed rents up 7.9% to £830 per desk per month.

What's New: Seven new offices opened in Central London including two by The Boutique Workspace Company, one near Hyde Park and a second in Shoreditech; Situu opened a new office in Victoria near Buckingham Palace; Fora opened a new space in Fitzrovia while Storey opened an office in Paddington; Landmark opened in King's Cross.

After climbing 3.4% in Q1, rates in the City of London edged up 1.5% QoQ to a median price £745 per desk per month. With the greatest density of flexible office space in the greater London region, demand has been high amongst businesses seeking both quality and amenities.

With many businesses looking for easy access to transport for their staff, prices for offices near most tube stations are a premium with offices within a 10 minute walk of Liverpool Street at £825 per desk while offices near Barbican station can be found for rates below the city median at £647 per person.

By office capacity, desk rates are fairly comparable for teams of 1-10 at £700 to larger enterprise offices for teams of 50 plus at £785 per person due to the quality of spaces located in the City of London.

After hitting a low of £500 per desk in May 2021, the median price to rent a flexible office in East London has increased by 18.4%, bringing the median rate to $592 per person per month and officially passing pre-pandemic rates. The rise in rates comes as somewhat of a surprise with a net increase of 10.5% in vacant space in the quarter.

Whitechapel in particular offers excellent value and although prices are up 13%, from Q1, the median rate of £479 per person per month (up 13% since Q1) is still well below pre-pandemic rates. Canary Wharf also has high quality space at affordable rates of £427 per person despite a reduction in the available Flex office space there. Wapping by contrast has highest rates at £809 per person per month, down 2% QoQ driven by an increase in vacant space in the last quarter.

East London has an adequate supply of offices across all sizes with today's best rates available for teams of 11-15 at £515 per desk.

What's New: InfinitSpace opened 'beyond Aldgate Tower' while The Office Group, General People, and Fora are set to open new centres in Shoreditch and Canary Wharf.

Prices in Hammersmith up 11.5% in West London

While elsewhere in London has seen pricing trend upwards from the pandemic lows, West London pricing remains unchanged for another quarter, despite a reduction in the available office space. With a 12.3% decline in vacant space from Q1, there are now far fewer available options outside Hammersmith & Fulham, which represent half of all available spaces.

Though, the median price remained unchanged at £450, prices in Hammersmith increased 11.5% to a median rate of £600 per desk, greatly skewing the combined rate for West London. This price increase was driven by a 32% decline in available stock as demand returned. Outside Hammersmith, businesses will find median rents as low as £275 per person per month, a considerable discount from the area's median rent of £450.

Businesses keen to snag a smaller office for 1-4 staff will find good deals with a medium rate of £367 per desk compared to larger offices for team of 16-50 at £506 per desk.

Despite a 9.2% QoQ increase in vacant floor space QoQ and a 18% increase since the start of the year, the median price remained flat at £300 per person. While rates are often linked to supply, there is limited vacancy in the South leading to greater price fluctuations.

When it comes to price and availability, Wimbledon leads the way with spaces available for teams of 1 to 4 at £290 per desk as well as larger offices for up to 60 people at £477 per desk.

Due to limited supply, 70% of the available spaces are for small teams of 1 to 10 with only a handful options available for teams larger than 25 people. 65% of South London's available Flex Office inventory is located in Wandsworth and Wimbledon.

What's New: The Office Group launched a new space with 51,000 sq ft in Borough Yards while General People will launch its new office on London Road later this quarter.

With limited supply, the price of flexible office space in North London has remained flat at £395 per desk, despite a 3.1% drop in available space QoQ.

Tottenham, and Finchley continue to provide the best value for businesses in need of a small office and offer a median rate of £144 and £260 per person respectively.

Closer to the City, rates in Finsbury Park and Wood Green are £425 and £395 per person respectively and also present more options for larger offices for teams up to 50 people (where most other locations are limited to 1-15 person offices). 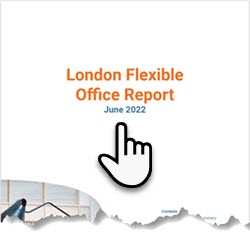 Rubberdesk is the UK’s flexible office marketplace with thousands of fully furnished serviced offices and coworking desks ready for you to move in and rent by the month or year. Since having launched in the UK in early 2020, the Rubberdesk platform now encompasses over 7,000 offices, an estimated 6 million sq. ft. of space with a capacity for 115,000 people.

Rubberdesk’s proprietary platform combined with industry insights from their office specialists helps customers find the best office for their unique needs. With a view across all available options, they simplify the process to create a bespoke shortlist, arrange tours and negotiate the best deals. All for free and without obligation.

Rubberdesk provides Flex Powered by Rubberdesk for commercial agents across the UK.

We're always up for a chat

We use cookies to help you find amazing coworking and flexible offices and help us improve the site.
They store no personal details and are explained in our privacy policy where you can learn how to disable them.